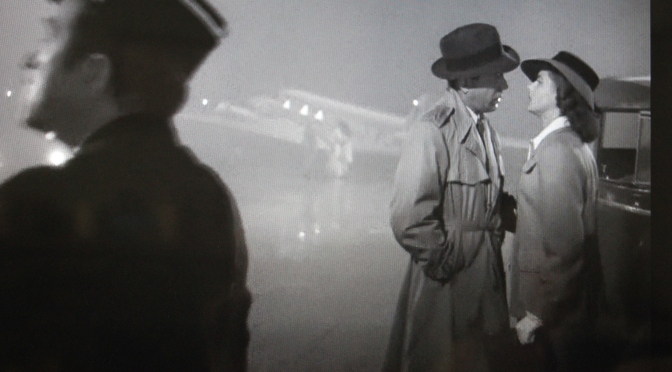 A close-up look at one of my most favourite scenes ever in film history.

National anthems are songs of patriotic loyalty, celebrations of a nation state. They are symbols of country or nationality as home, and often act as calls to defend or protect that home.  In films, the inclusion of a national anthem can often be seen as an economic device to provoke an emotional reaction in relation to these themes. The greatest example of this is surely Casablanca.

Rick, now a cynical barkeeper in the literal and metaphorical desert-place of Casablanca, meets Ilsa again as she and her husband – the fugitive Czech Resistance leader Victor Lazslo – seek safe passage from Nazi occupied land. As Rick learns the truth of Ilsa’s love, he faces the moral dilemma of reviving his relationship with her, or sacrificing it for Laszlo’s heroic cause.

The singing of the French national anthem La Marseillaise takes place at Rick’s saloon, during an enactment of this dilemma.  As Laszlo queries Rick’s refusal to help him obtain letters of transit (Rick replies “ask your wife”), the German drinkers begin a rendition of their national anthem “Die Wacht am Rhein”. Incensed, Laszlo instructs the orchestra to “Play La Marseillaise…Play it”.

These words are a mirror image of Ilsa’s earlier words to Sam, Rick’s piano player: the oft misquoted line “Play it, Sam… Play As Time Goes By”. This is Rick and Ilsa’s love song, and so Laszlo’s almost identical words – also for a song – position a direct contrast of the two themes that are the crux of Rick’s (and Ilsa’s) dilemma: personal happiness against public good, man against mankind, love against war.

In doing so, the scene of La Marseillaise conveys the entire emotional arc of the movie. It foreshadows Rick’s return to the fight for the common good (symbolised here by his famous nod to the orchestra, who seek his permission to play the anthem), but at the same time, it exposes the simmering tensions beneath the plot by illuminating the stories and emotional contexts of other important characters.

These characters are all, in some way, temporary refugees; stuck in the liminal site of Casablanca where they “wait and wait and wait”. The scene of La Marseillaise offers lingering close-ups of their faces as they react to the scene.

This, for example, is Captain Renault’s expression while watching the Germans sing.

A self-confessed cynic with no scruples, Renault’s expression here betrays something not quite as neutral as he insists. He will also, eventually, return to fight for the common good.

It is a similar expression to that of Rick’s, as he too watches with Laszlo.

Despite claiming he “stick[s] [his] neck out for nobody”, Rick  is known to “always happen to be fighting with the underdog”. Here, the conflict between idealism and cynicism plays out in the shadows across his body and face.

When Laszlo strikes up the band, this is the face of Rick’s former flame, Yvonne as she sings along.

Yvonne appears only briefly in Casablanca, but the few minutes of her screen-time convey a rich emotional journey that acts as a micro version of the wider film. Rejected by Rick, Yvonne takes up with a German soldier and sides with him in a fight with a Frenchman, an act that symbolises her neutrality to the ‘sides’ of war, and her submission to personal desire and love instead.

The close-up of her singing La Marseillaise suggests a transition, an emotional return to her homeland that awakes in her a defiance of this submission.

Yvonne’s journey is representative of the whole crowd, the collection of French refugees who have up until this point tolerated the control that the Germans exert over the area. This is the emotion of the crowd as their singing drowns out Die Wacht am Rhein. 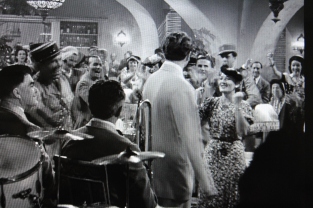 This surge of feeling is instigated by an anthem for a homeland, sung far from home. It is also a song of battle, of fighting for a place, a land that they may never again see.

The power of this scene  also transcends the film. The actors in the crowd of Rick’s bar are made up of actual refugees, displaced people recruited as extras by Kunitz, and their tears were real. In this way, the scene – filmed in 1941 – goes beyond the narrative and captures a true moment of the wartime anguish it depicts.

The camera pauses on Victor Laszlo as he conducts. The focus serves to highlight his concentration, suggesting a man of singular purpose. 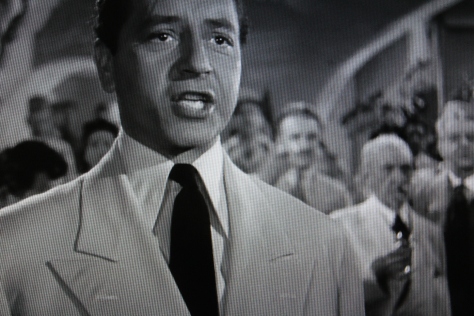 It is at this stage that Laszlo can be understood as a hero, as someone with the dynamism and charisma to lead a revolution. Before this scene, he appears fairly unremarkable, but his role as the conductor of an orchestra is symbolic of the importance of his wider political role as a conductor of change.

It is not only the audience that sees this. Here is Ilsa, looking at Laszlo.

At the point where the audience is able to see Laszlo’s power and purpose, the camera switches immediately to Ilsa, thus transferring the audience’s viewing experience on to hers. This enables an emotive engagement with her expression, and articulates her own dilemma. As she gazes up at her husband, her face conveys what she will later confess to Rick is a “feeling she supposed was love”. What she feels for Laszlo is pride, the admiration of an idea, a duty and devotion to cause.

The national anthem thus contextualises and dramatises the concerns of the plot. Singing La Marseillaise is an act of defiance – on a micro level – of the occupation of Rick’s bar, while its emotional gravity comes from what that stands for. It is a defiance of occupied France (which is also the site of Rick and Ilsa’s love affair), the Vichy regime and the Nazis. That it is sung in French and the film does not include subtitles further adds to this stance of an unapologetic, impassioned defence of a nation.

In this film-noir setting of shadows and doubles, light and dark, black and white, the singing of La Marseillaise uses the call of common ground, home and patriotism as a call to pick a side.

And eventually, Rick does. Encapsulating the many personal sacrifices, lost chances and unfulfilled dreams that underscored wartime life, Rick forsakes a beautiful future with a woman for a “beautiful friendship” of brothers in arms. 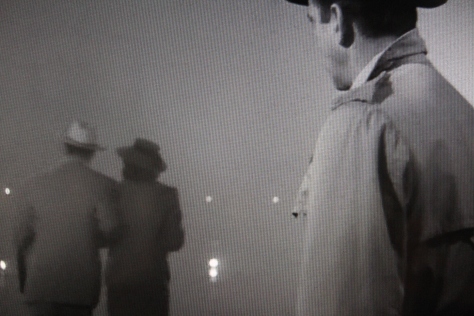 (But if I were to be cynical, my final analysis of the film’s message might be: Don’t let that insignificant hill of beans ‘love’ get in the way of a man’s heroic devotion to men … I mean mankind… after all…)

What is home to you? What does it mean? Is it a place, person a thought or a thing? Is it acquired through journeys? Through language? Bricks and mortar? What is its relationship with notions of identity and nationality? I explore these questions in literature, film, art and music, from Jean Rhys to Joni Mitchell and from Foucault to Eastenders

Check out my ‘Home’ themed playlist on Spotify!

thoughts on the topic of 'home'